All about our company & its services

Dr Clean AirBlogDryer Vent CleaningVENTING YOUR DRYER WITHOUT OUTSIDE ACCESS

Venting a dryer without outside access can be a very challenging task, even for a homeowner who’s got quite a few medium-level difficulty projects under their belt. The best way to vent a dryer without outside access is to run a vent hose through a window or to run a vent hose up through your attic space to a vent on your roof. Alternatively, you can vent your vent into your home and install a vent cover. Since the venting to the exterior of your home is optimal, you should consult a professional to use one of the alternative methods such as venting inside your home.

How to Vent a Dryer Without a Vent to Outside?

Probably the most common way to vent a dryer without a vent to the outside is to use an indoor dryer lint trap.

These lint traps are basically detachable filters that are installed at the end of the flex vent . Most indoor lint traps use either one or two filters (and some use water) to filter the air of the highly flammable lint particles that dryers produce.

You may be able to mount it on the wall, or it can just be left on the ground next to the dryer.

Some indoor lint traps even have safety vent flaps which automatically opens to release exhaust if there is a clog blocking the vent.

The downside of indoor lint traps is that you have to clean the filters pretty frequently. In addition to the regular lint trap inside the dryer. Also, there is a chance of some lint particles (and humidity) going into the indoor air which wouldn’t happen with a normal setup. 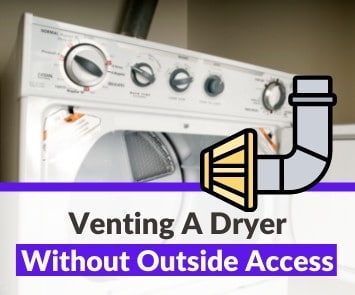 Vent It To A Window

The window dryer vent kits will allow you to install it on the bottom of a window. But which covers the sides to prevent outdoor air from going inside.

It is similar to a portable A/C window connection, except that the vent hood has a flapper.

And if it is a temporary situation, you could just put the flexible hose out the window. And stuff the sides of the window with something to prevent air infiltration.

The third option in venting a dryer without access to the outside is install a ventless dryer. They are something that Americans aren’t familiar with but which are popular in Europe.

Ventless dryers don’t vent to the outside. But they recirculate the air inside the dryer and it filters all of the lint.

All of the moisture from the clothes gets condensed (turned into water) as it goes through an interior heat exchanger.